The best of Staten Island pizza.

Ahh, Staten Island.  You can find numerous Italian eateries, bakeries, and supermarkets on any street.  There’s a pizza shop in every plaza.  But with all the Italian shops around, who wins for the best on the Island?

This post is comparing the New York style cheese pizzas offered at both Goodfellas, and Denino’s on Staten Island.  Both are brick-oven pizzerias, and beloved by Staten Islanders, as well as other New Yorkers.
Goodfellas Pizzeria.  This one is a local favorite.  Goodfellas has three locations in Staten Island, with the original being founded in 1992 in Dongan Hills, and the other locations in Eltingville and Rossville, respectively.  I have been to the original location only once, and they offer some great food there.  The fried calamari, fried zucchini sticks, and spinach roll are at the top of the list of three favorites.
Goodfellas has won national awards for their Vodka Pie, and also won the title of World’s Best Pizza numerous times at the International Hotel and Restaurant Show annually.  I was hooked the first time I tried their New York Style pie.  Thin crust, not too crispy or soft, just the right amount of dough.  Perfect amount of cheese, satisfying that cheesy craving with every bite.  The sauce is flavorful, not too thick, but I have had incidents in the past of the sauce dripping off the pizza and onto my clothes.  Not good at all, so be careful.

They deliver, accept credit cards even over the phone, and the Rossville location is less than five minutes from my house.  Score.

Goodfellas Pizzeria
655 Rossville Avenue
Staten Island, NY 10312
Denino’s Pizzeria and Tavern.  Founded in 1937 and known as one of the best pizza pies in New York City.  When it comes to pizza, Denino’s puts Staten Island on the culinary map.  Denino’s is known as a destination pizzeria.  Numerous magazines and articles have noted that “a New Yorker’s pizza education is incomplete if they have never tried their pie”.  Honestly, though, I don’t know why Goodfellas doesn’t receive as much attention for their pies across NYC.
Yesterday was my first time trying Denino’s.  What opted me to do so was seeing it on a pizza segment on The Daily Show.  If you haven’t watched it, please do so, it’s hilarious.  Jon Stewart rips apart Donald Trump for the way he eats NY pizza.
Pizza chain, stacking slices, and eating pizza with a fork.
Denino’s only has one location in Staten Island located in Elm Park, and they don’t deliver.  That means a 20 minute drive for me.  They also don’t accept credit cards.  That means a visit to the bank beforehand, or withdrawing cash from their ATM machine.  Hopefully it’s worth the hype.
“In crust we trust” is their motto, and it’s a damn good crust.  Thin crust, even thinner than Goodfellas, toasted bread crumbs on the bottom, with the right amount of crispiness.  However, I was pissed at the fact there were parts of the crust that were burnt.  In crust we trust, yea ok.  Well I don’t believe in black crusts. 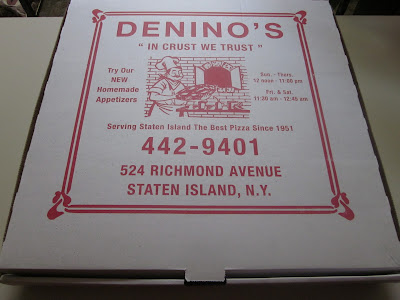 The sauce was thick, with a hint of spiciness, and you can taste the herbs.  I had two more complaints about this pie, though.  There was a huge lack of cheese on it.  In fact, all I tasted was dough as I ate each slice.  This pie was also noticeably smaller than Goodfellas New York Style pie.

The verdict (at least for me): Goodfellas for the win.  Denino’s has a great crust, but that’s all it offers.  It’s really not worth the drive. But I guess it all depends on your location on this island.

Get the latest update in your inbox